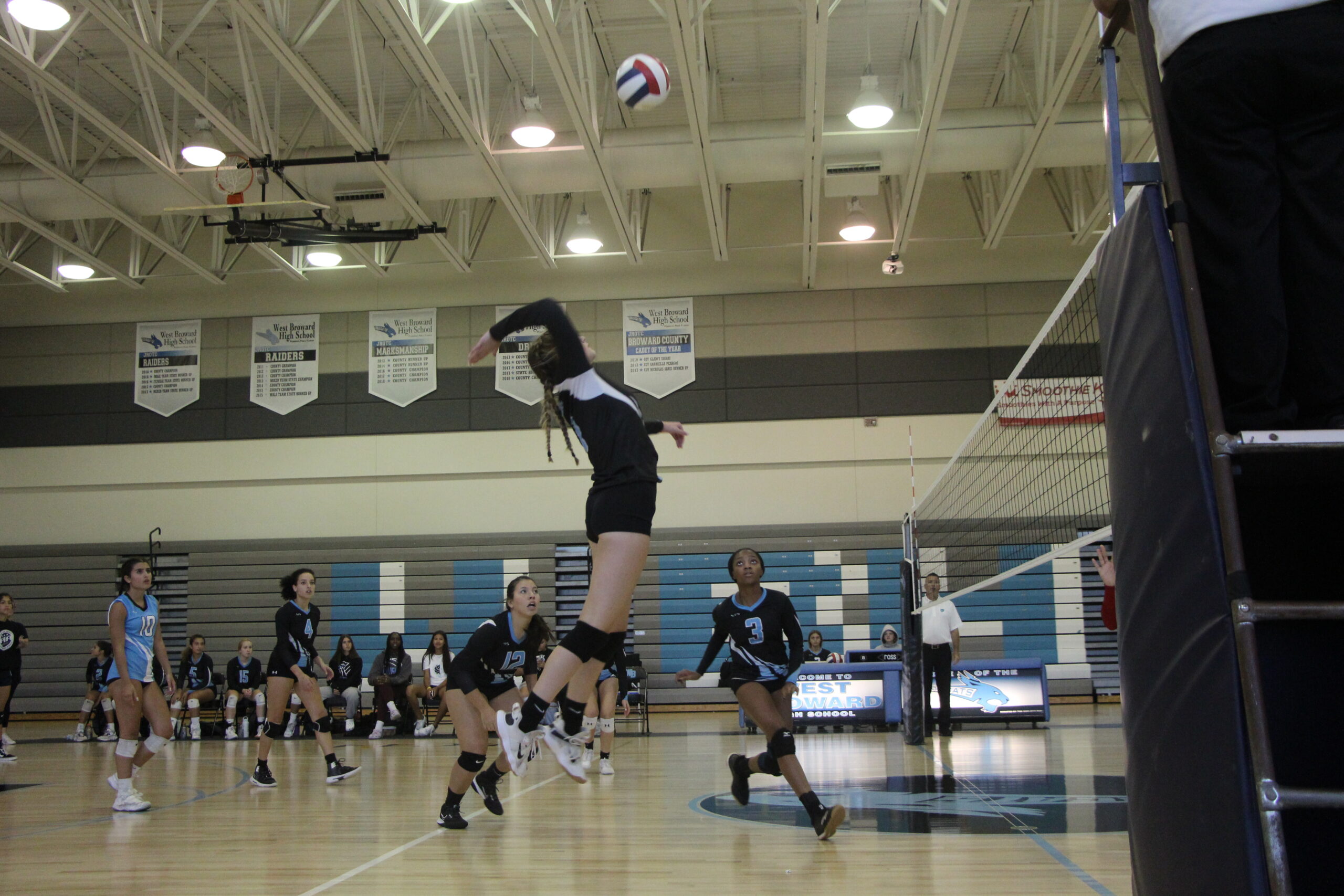 After finishing last year’s 5-11 season, the Lady Bobcats were hoping to improve their record, however, due to the loss of outgoing seniors, they have been struggling on the court to maintain a sufficient season.

After ending a 7-12 record in their 2022 campaign, the Lady Bobcats still persevered throughout their season knowing they had their home court as an advantage. With renewed chemistry from the teammates, their hopes for this season were high.

“I think I have a really good group of girls, both skill-wise and chemistry-wise. If they continue to push this season, I think they have a good chance at bringing districts back home this year.” West Broward Girls varsity volleyball coach Allison Edens said.

With the Bobcats having their home court accessible, it allowed Edens to set up their summer conditioning and prepare for the emotional and physical stress of their 2022 season.

“As soon as I got the start dates for the season from the FHSAA, I set up conditioning over the summer, which we did not have before because we have not had a gym. We got started earlier with that, which also meant that team bonding and team building started earlier.” Edens said.

In their first game of the season, West Broward would play against Cypress Bay in a tough match-up. The Lightning led the game in the first set with a score of 25-12. Despite tight second and third sets, the Bobcats would drop sets, 25-22 and 25-20, making the score 0-3. Senior outside hitter Jariana Ramirez led the game with 15 attacks and 6 kills and junior middle hitter Mia Martinez followed her with 17 attacks and 3 kills. Junior libero Sophia Bernet had a total of 22 service receptions and 18 digs.

“They usually always have a good team, however, I think that the girls were nervous because they play against a lot of those girls in club season, so it was more of a personal thing, but first-game jitters are always apparent, no matter who you play,” Edens said

In the Bobcats second game, they played against Westminster which is a team known to be able to recruit, unlike the Bobcats. West Broward lost in three sets, 25-16, 25-19, 25-11, concluding in a score of 0-3. After losing, the Lady Bobcats would come back and consecutively win their games against Miramar and Everglades. In the Miramar game, the Bobcats dominated in three sets, 25-10, 25-7, 25-9. In their tough battle against Everglades, West Broward pulled out a win in five sets, 24-26, 25-15, 27-15, 25-27, 15-11, ending the game with a 3-2 win. Due to the improvement in team chemistry, the Bobcats would show growth in their performance.

“I think there was a different mentality, but also learning to work better together and communicate because this is the first year this group of girls have been playing together.” said senior setter Mia Perez.

After coming back from their losses, the Bobcats would fall back and lose against Stoneman Douglas 3-0. Following this, the Bobcats played in the Chaminade Madonna tournament on Sept. 9. Going into these match-ups, the Bobcats had three players out of town, and one unexpectedly ill. Consequently, West Broward lost against Divine Savior Academy 2-0, Pine Crest 2-0, and St. John Paul II Academy 2-0, Nova Southeastern University (NSU) 2-1, and Spanish River 2-0.

“The Chaminade-Madonna tournament is notoriously tough. Out of all of the 16 teams that participate, there are only four or five public schools. It is a predominantly private school tournament, and these schools can recruit and have better players. It is hard to compete with, but it is a good motivator for us.” Edens said.

After struggling with prior games, the Bobcats would go along with their season winning three consecutive games against Nova 3-0, Miramar 3-0, Monarch 3-2. Regardless of their win streak, the Bobcats would lose against Western 3-0.

“The three consecutive wins came on the heels of us getting put through the ringer at the Chaminade Madonna Tournament. I think that the girls were more fired up because they were tired of losing” Edens said.

For the Bobcats last week of games, they were prepared to face Pines Charter and South Plantation where they would lose 3-0 in each.

“The losses for Pines Charter and South Plantation were tough because they are talented teams. That is not to say we are not talented, but it creates a tougher mental game for the girls and that’s something we struggled with.” Edens said.

“We lost our starting libero in the first fifteen mins of the game. She collided with another one of our back row players and took a hard elbow to the jaw; extreme enough to where we needed to send her to the emergency room. That totally threw our team in the opposite direction of a win.” Edens said.

In regards to next season, the Lady Bobcats plan on being more disciplined and more eager to win these important games.

“I think that our discipline needs to increase tenfold. I have dedicated athletes, but I need them to come in hungrier and realize that it takes a lot of hard work to be feared in the sport.” Edens said.