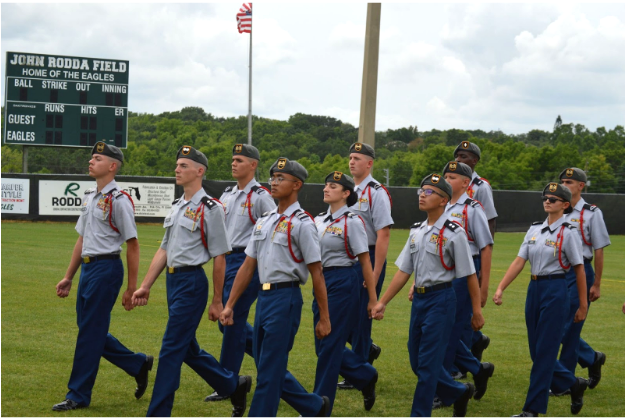 PRACTICE MAKES PERFECT: The Mixed Unarmed Platoon Regulation team marches across the field in perfect formation. Thanks to their rigorous practice schedule, the mixed platoon was able to perform at the highest level in any conditions. Photo courtesy of West Broward JROTC battalion staff

In the past four competitive seasons the West Broward Junior Reserve Officer Training Corp (JROTC) has laid claim to the title of champions in drill, a title they have maintained this year as well. West Broward’s renown drill team competed in the 2022 Drill States competition at George Jenkins High School in Lakeland, Florida.

“We always have a good mindset like we need to get things done and that we are just going to be really good,” said Junior Cadet Sergeant Major Ryan Mijares. “We go into practice with the mindset that we are going to be champions.”

“The work that the students put in before the competition did show once we started performing,” Mijares said. “It really made it easier because it made the competition more like practice and it was more like muscle memory at the end of the day than anything else.”

Not only was the Drill Team able to celebrate their high placements in the individual events and their victory of placing first overall at the competition, but the team can now celebrate knowing that the grueling hours spent practicing in the intense Florida heat, was all worth it in the end. The team worked hard for every placement earned at the competition and were able to demonstrate their commitment and dedication to the JROTC program. In the four years that the Drill Team was able to compete, the teams have taken home the first place trophy after each competition and now the 2022 Drill Team is able to take on that legacy.

“The results speak for themselves. The students work really hard. We practice every day of the week, from 2:50 to sometimes 5:30 in the sun and heat,” said First Sergeant David Torres. “I would say this year has probably been one of the most challenging years because we have not done drill for two years because of the pandemic. I am definitely very proud of them because it is a huge accomplishment to place first at States.”