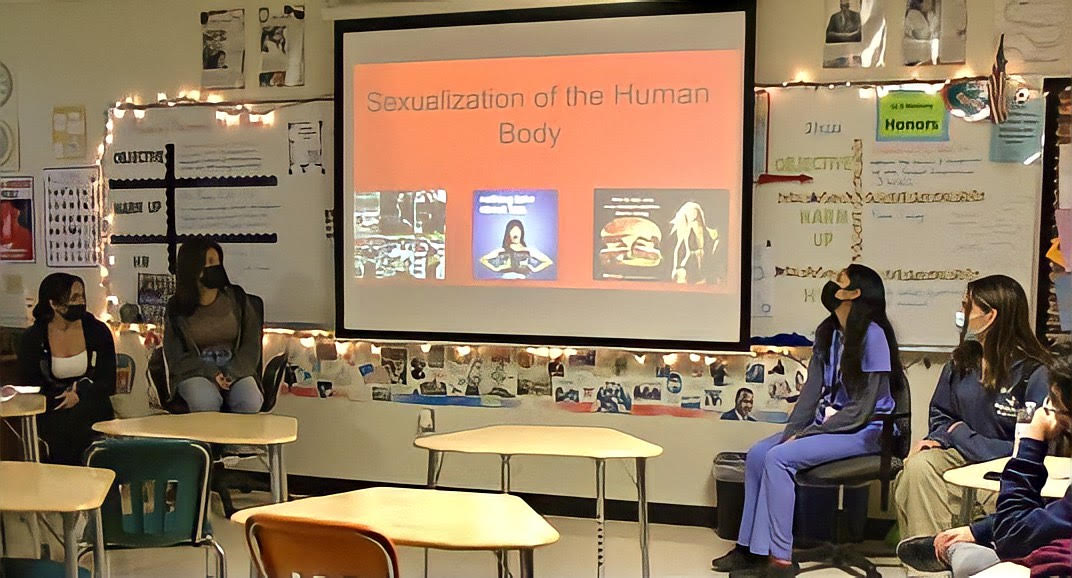 SPEAK YOUR MIND: (from left to right) Junior secretary Amanda Rodriguez, junior treasurer Darla Pazmino, senior president Kayla Serrano and junior vice president Gabriela Jimenez present the topic of “sexualization” at the club’s third official meeting on Feb. 15. Participation was active between officers and club members as they discussed personal experiences and viewpoints about the topic. Photo by Valentina Padula

Growing up in an age of intense technological influence on the younger generation, social media today is focused on teenagers. The newly introduced Body Positivity Club contrasts from other West Broward clubs by opposing these unrealistic standards and encouraging a positive self-image.

Senior president Kayla Serrano came up with the idea of forming the club after noticing negative social media influence on body image from apps like Instagram or TikTok. Having her own experience with these issues, Serrano contacted biology teacher and club coordinator Donna Yard in hopes of starting a body positivity movement. The club now formed, members meet bi-weekly under an undetermined schedule and with a goal of spreading awareness on body image. Their first meeting was held on Jan. 18, and club activities began in the following two meetings that took place on Feb. 1 and Feb. 15.

“I have seen a lot of insecurities from social media and I hope to raise people’s spirits and teach them how to love yourself,” Serrano said. “You see so many people looking at one image and wanting to conform to that. Everyone has the right to love themselves and have the opportunity to do so without being pressured into it.”

The Body Positivity Club informs and discusses details about body image conflicts and find where the root of these problems are found in society. Members have held meetings about the effects of social media on body image and the types of sexualization in real-world settings.

“Each meeting has a different educational theme,” U.S. History teacher and club sponsor Cassia Laham said. “We have spoken about what body positivity itself means and how to accept yourself and your own body. We also spoke about using the human body as a commodity to sell products, movies and advertisements.”

The club activities are aided by a collection of officers, which consist of a small group of female upperclassmen who seek to educate their peers on the topic of body positivity. After experiencing the impacts of body image on mental health, the students came together in hopes of creating a community that supports this issue.

“I joined the club because I feel like body positivity is something that affects everyone and it needs to be talked about so much more,” said junior secretary Amanda Rodriguez. “I wanted to be a part of that. I want to make a difference in school and spread the message.”

The impact that Serrano hopes to achieve is wide-spread. While favoring quality over quantity of members, her goal is to spread her message and hope that students internalize it. Having begun in January, there are no planned events, but a bright future is ahead for the club as members and ideas only continue to grow.

“I was really insecure about my own self, and I feel like that is where the idea to create the club came from because I know other people are going through the same thing,” Serrano said. “If I was able to find my way, I think other people should be given the same opportunity as well.”