By: wbthelynxnewspaper
In: Articles, News
With: 0 Comments 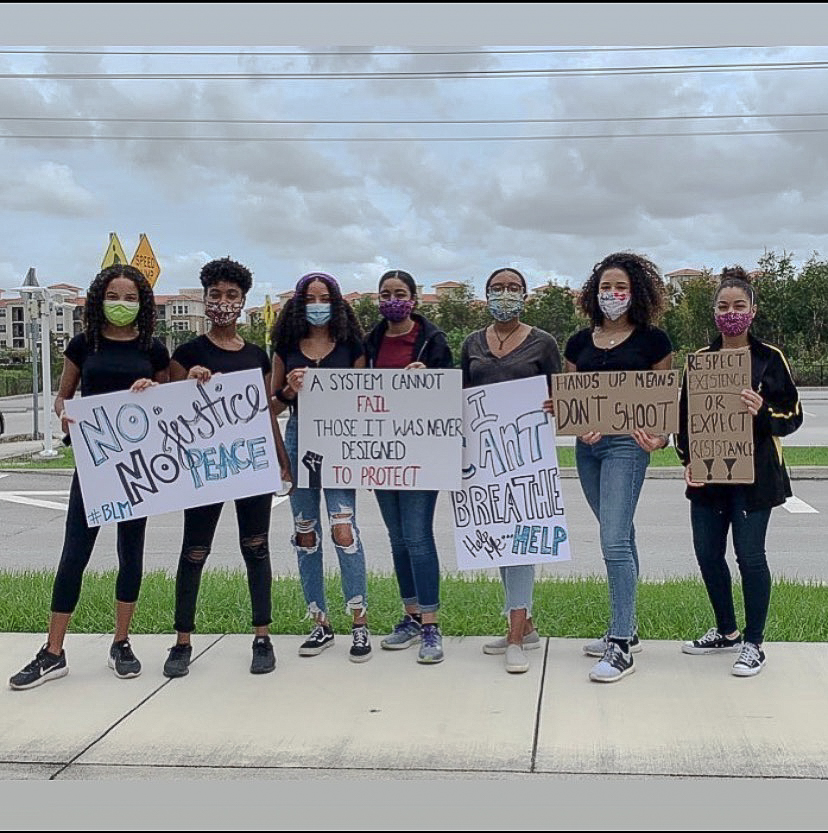 CALL FOR ACTION: West Broward High School Students Sydney Millwood, Spencer Millwood, Kacey Bellamy, and Sydney Bellamy protest outside of the City of Pembroke Pines City Hall on June 3, 2020. The protest was held against the police brutality and oppression sustained by Black Americans, calling for equality and justice in the United States. Photo by the Edge Yearbook staff.

On Jan. 15, 1929, Dr. Martin Luther King Jr. was born. As an unyielding and dedicated civil-rights leader since the 1950s, Dr. King would pioneer the fight against racism and civil rights injustices. In 2013. The Black Lives Matter Movement (BLM) was created to continue the empowerment of black voices in America.

King’s legacy serves as a symbol to all Americans of the fight for racial injustice. King fostered this movement as a way to show the terrible acts of racism and injustice acted upon Black Americans across the country. In 1955, he rallied against unfair treatment during the Montgomery Bus Boycott. He founded the Southern Christian Leadership Conference (SCLC), among other organizations to help in the call for achieving equality. He led the march in Washington D.C. in 1963 for jobs and freedom to protest deep racial injustices and shared his dream for a better economy and democracy in the United States. Since his death, his impact serves as a reminder to us to continue the fight for the freedom, peace, and equality of black lives across the United States.

“Dr. King had a way of motivating people. He was a true leader and gifted speaker,” said Carisse Langford, social studies teacher. “Through his voice, he gave hope for a better future. He showed how to fight for racial equality and promoted non-violence.”

Since his tragic death in 1968, many great civil rights leaders would continue King’s fight and message of civil equality and fairness. John Lewis, Hosea Williams, Barbara Jordan, Nelson Mandela and many other well-known activists emerged in the early 70s to late 90s and used their voices through their jobs and positions in society to speak for racial inequality. These demonstrations and further campaigning would eventually allow them the same opportunities to own businesses, have greater standing in the workplace, and be elected into office.

“I think that this is what we are still fighting for. Even though it’s been over a long period of time and it’s kind of sad and depressing when you think about it because it’s really stupid how people just cannot see each other as equals or treat each other as equals without having to feel superior because of skin color,” said Chelsea Taylor, a freshman at Fort Lauderdale High School. “I still believe we are still fighting for justice every single day, and I feel that it is very imperative that we do.”

Within the past decade, a new movement came to the center stage in 2012 after teenager Trayvon Martin was killed in Sanford, Fla. and his murderer was acquitted. This incident sparked the BLM movement. It was founded to protect those suffering from hate and racism in their communities, and it brought attention to many Black lives lost due to violence and police brutality. Tamir Rice, Eric Garner, George Floyd are among the many other Black Americans across the United States who have been sadly recognized through this movement. On their website, it explains their main goals “to eradicate white supremacy and build local power to intervene in violence inflicted on Black communities by the state and vigilantes.” Through this message, they have successfully rallied for many issues that have been affecting black communities including gun violence, police brutality, women’s rights, LBGTQ+ Community issues, and an overall call for a better justice system in the United States. Through the BLM Movement, activists have remembered and honored the long ago by joining efforts to spread the message of his work and make the transition from the divided nature of past instances in our history to a safer and fairer country for black Americans in all aspects.

“I think we should get to the point where we’re uplifting each other,” said biology teacher Donna Yard. “I think that’s the transition we need to make and take from his teachings. He preached about nonviolence, love conquering hate, just unity, and becoming better people, not necessarily forcing other people to like us, but become people that [other] people want to like.”

Martin Luther King Jr. presented the nation with his dream for unity and peace. He spoke of the abolishment of violence and racial prejudice. His hope was to build a better economy and a safer nation for everyone. His message of equality is still alive today and the BLM Movement has become his voice for all Black Americans. Through his words, he told us of the importance of the civil rights movement and reminded us not only to focus on how far we have come but how much work we still have to go.

Dr. Martin Luther King once said, “True peace is not merely the absence of tension; it is the presence of justice.”