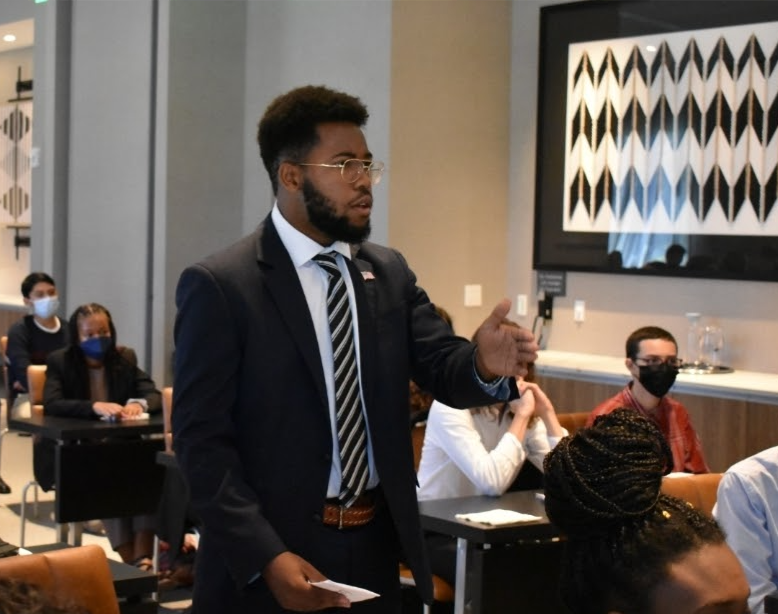 WE THE PEOPLE: Makai Henry, a junior from Nova University School, delivers a speech at a mock congress camp on Nov. 6 at Sawgrass Mills mall hosted by Incubate Debate. The Debate Broward initiative raised the number of participants from Broward County schools in debate circuits such as the Florida Forensic League and Catholic Forensic League. Photo courtesy of James Fishback

The Florida Hurricane district is one of the most competitive districts in Florida, and being right in the middle of it, Broward County has had a large potential for speech and debate. However, it was not until recently that the school district reacted to the popularity of speech and debate and embraced it as a part of its curriculum.

Starting in 2012, the Debate Broward initiative was piloted in just fifteen schools as the county’s official speech and debate program in order to bring the subject to every school. In the nine years since then, the program has expanded to encompass every high school, middle school and an increasing number of elementary schools in Broward County. Currently under the direction of Susan Cantrick, the program hosts multiple tournaments a year, provides instructional resources to schools and subsidizes the creation of new teams. The program ultimately hopes to teach valuable real-world skills and change lives.

“Without Debate Broward, we would not probably be here. Debate Broward is what made it mandatory for this program to be a class,” said Silver Trail Debate and Literacy Coach Tawanda Carter. “Making it a class provides students with the space and the time to work on things during the day so that they could explore other options.”

The secret behind the rapid rise of Debate Broward’s member schools was the team assistance resources provided by the district. At all levels, the initiative provides educational resources, coach training and competitions throughout the year. A suit drive at Apollo middle helps to cover competition attire for any student that cannot afford it. Past students and parents donate any extra suits they have which can then be picked up by new students. The only thing that the initiative does not directly cover at any level is external resources such as private research packages and membership into any of the major debate leagues. Fortunately for schools, participation in a number of events hosted by the program is rewarded with stipends that grow proportionately to participation.

“We have to fundraise and pay for almost everything we do,” Marjory Stoneman Douglass debate coach Dr. Steven Abraham said. “Coaches have a few weeks to decide if they want to commit to attending 7/8 ASTs and if we agree to perform that level of work, we get the affiliated sum of money.”

More than just providing resources for schools, the county also hosts activities and tournaments throughout the year that different schools can participate in with their teams. There are three tournament circuits hosted by the Initiative. There is one for elementary schools at Dillard High, one for middle schools at Marjory Stoneman Douglas and one for high schools at Northeast High. Every tournament, except for the championship at the end of the year, takes place after school. The championship tournaments are hosted at schools that did not host the after school tournaments to maximize the number of schools that can benefit from hosting.

“The only tournaments that we attend are the monthly MAST’s, which is the Middle After School Tournament,” Carter said. “The only Saturday that we do is champs, so everybody is required to do the champs tournament at the end of the year.”

Beyond providing services and activities, the Initiative also creates spaces in schools for students to interact with each other and grow as individuals. After a year of online learning, debate classrooms have become focal points of renewed interaction and friendship, especially in programs that hold after school activities where students can interact freely. Students in their school’s debate programs learn critical thinking and presenting skills which carry over into their other classes. Not only do debate programs facilitate lifelong learners, but they serve as a place to share ideas and learn from one another.

“It created opportunities for students by bringing their schools into the circuit,” Dr. Abraham said. “The Debate Initiative has helped schools with less institutional knowledge catch up to programs which had been developing for decades.”

LIVE ACTION: (left to right) 5th grade duo interpretation partners Sophia Park and Angelina Herrera practice delivering their piece at an after school-practice at Panther Run elementary. Since both competitors must be visible at all times, they have to use creative techniques to avoid drawing attention while their partner delivers a monologue. Photo by Cesar Guadamuz

EQUAL JUSTICE UNDER LAW: The West Broward debate team visits the Ft. Lauderdale Circuit court and mocks a supreme court trial with the help of certified constitutional lawyers. Programs such as the 2019 court visit were funded by the Debate Broward initiative which is always looking for more opportunities to connect its students with professionals and show them different possibilities. Photo courtesy of Diane Harrison